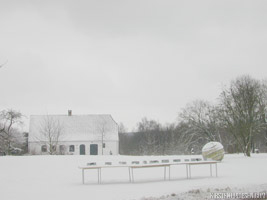 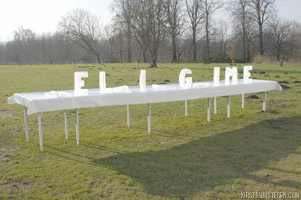 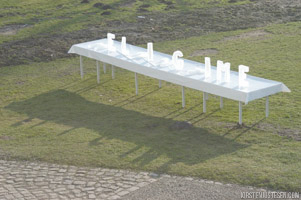 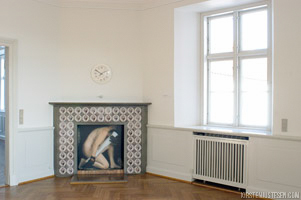 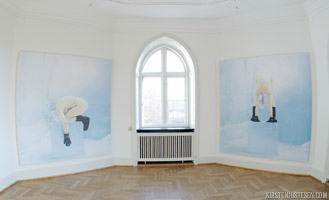 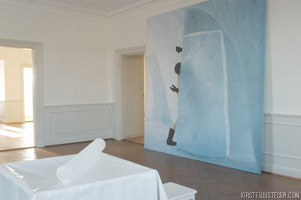 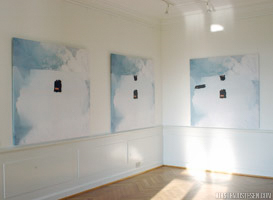 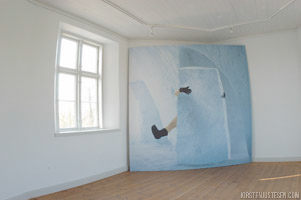 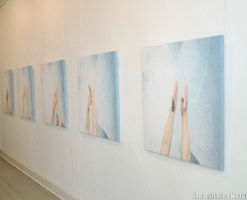 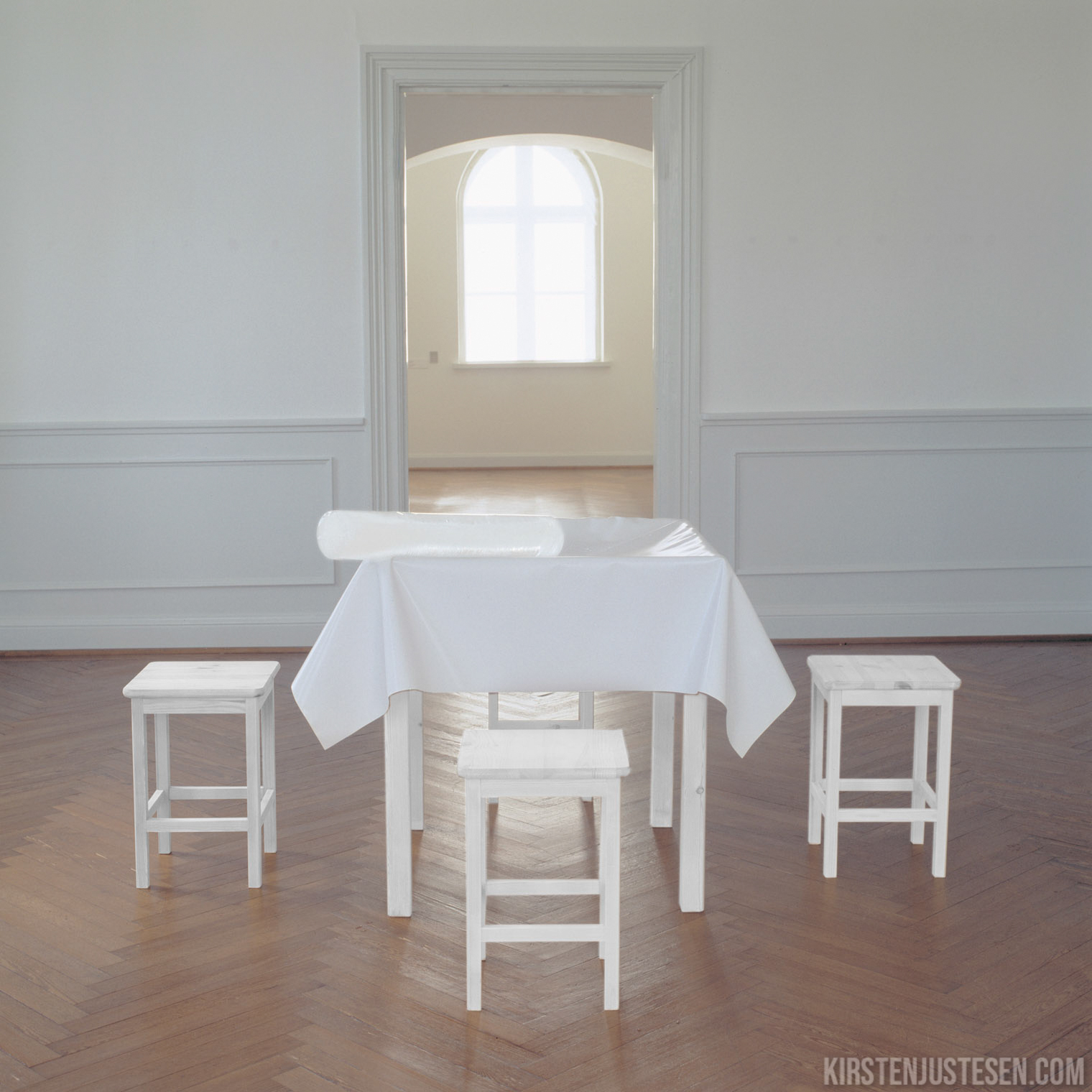 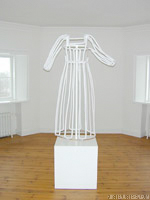 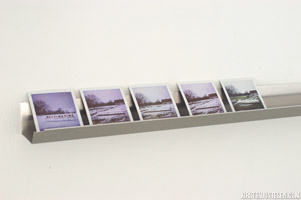 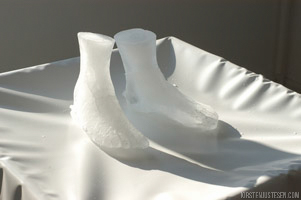 MELTING IN TIME #3
In installation with water and sound

The sculptor Kirsten Justesen has held a central position within the Danish art scene since the early 1960s. She has experimented with sculptural and three-dimensional modes of expression by means of many different media and materials, and has worked with concept art, process art, and body art. Kirsten Justesen’s art has evolved from the avant-garde art of the 1960s to her Feminist pieces from the 1970s to the site-specific installations of the 1980s and onwards to the manifestations of the 1990s, focusing on the corporeal and sensuous.
A recurring feature of Kirsten Justesen’s work is the carefully staged photographic tableaux in which the living body constitutes a key element in her sculptural idiom.
Kirsten Justesen often works in series which explore different thematic approaches. The most prominent of these series is MELTINGTIME, which Justesen has worked with since 1980, creating installations at ten different art venues in Denmarkand abroad.
MELTINGTIME #11 will be presented in 2003/4. The latest total installation based on the theme, MELTINGTIME # 11 is the result of ongoing explorations of the nature of sculpture and time.

MELTINGTIME#1-11
This catalogue presents Kirsten Justesens ten previous MELTINGTIME exhibitions, all of which have involved ice as part of different concepts: objects made from ice, tales about ice, philosophical texts about ice, excerpts of research about ice, records of ice reports, videos of ice, performances with ice, the sounds of ice, and mail art for the melting time.
For the exhibition MELTINGTIME # 11, Justesen has created new, simple ice sculptures: sticks, feet, tables, chairs, letters, and an ICE DRESS. The ice sculptures are supplemented by new photographic tableaux and sound images. The exhibition is structured as a total installation taking place in various exhibition spaces, indoors and outdoors.

The Disappearance of Objects
During the opening hours of the exhibition, the ice objects will embark on a process of melting which will last until the museum closes for the day. The ice sculptures incorporate heat, conquer the spaces they inhabit and begin a change. Kirsten Justesen’s ice objects place the traditional sculptures – which you can walk around – on a par with installation art – which you can enter into. Thus, the tangible is linked to the abstract. In the works, the phenomenon of melting becomes a metaphor for transformation which sees a substance moving from a solid to a liquid state through the introduction of heat. The disappearing ice objects point towards the mutability and impermanence of the world, thus standing in direct opposition to the traditional sculptural monument which claims an ideal permanence and stability. The photographs record the process of melting, capturing the metamorphosis in the permanent, yet ambiguous statement which meets the spectators.
With the ice objects, Kirsten Justesenworks with the ways in which works of art are finished and rendered invisible, thereby challenging our preconceptions of permanent sculpture. At the core of her work, Justesen addresses the things that disappear – the absence of objects. The media used by the sculptor is ice, which disappears during the course of the day. The sculptural form becomes unstable, irregular, and unpredictable. The ice objects disappear physically, possibly as evidence of a process carried out in vain. The disappearance of the ice leaves the ice objects behind as puddles of water which are collected in moulds and refrozen.

Repetition
Repetition is a central concept in MELTINGTIME #11, as the exhibition includes elements of the MELTINGTIMEs carried out in the last 20 years. Also significant is the fact that the process begins anew each day throughout the exhibition period, repeating the transition from frozen to molten shapes. The repetition becomes part of a meditative field which links a human act with freezing, presentation of frozen ice, and melting. This is an artistic act which creates and (re)establishes a physical form, only to let it disappear again. This repetition makes the day-to-day actions form part of poetic moments, where the creation and demise of the sculpture is captured in time – in the past and present.

Sculptural Time
The ice is transformed in time, thus making the concept of time part of the works. In time, everything in the visible world is changed.
The freezers working to transform water into ice bear witness to the opportunities offered by technology for manipulating temperature. This accentuates the absence of seasons and the presence of the present time.
Looking at Kirsten Justesen’s works featuring a woman and ICE STICK installed in fireplaces provides a clear image of the artist’s play with the absurd and the humorous. The ICE STICK is melting in the warm space which is completely filled by the body. The body also serves as carrier of meaning, of significance, acting as the firm sculptural form which in reality will also change in time, eventually disappearing. The ICE STICK becomes water on the floor, left there for spectators to look at.

Roaming
In MELTINGTIME #11 ice and thaw are phenomena which link the installation in the museum to the outside world through an information system. The global network provided by computers links the local situation to global ice reports, and the carefully delineated, unstable, and continuously rebuilt installation is linked to a world of less delineated, even less stable and continuously updated information about change. Kirsten Justesenopens up a world of change which leads spectators from an artistic universe into the concrete world and back again. We travel not only in time, but also in space.

Weather Conditions
The melting taking place in MELTINGTIME # 11 is subject to physical laws where the melting point is identical to the freezing point, and to the law of coincidence which takes the form of the changing temperatures due to weather conditions and shifts in time.
It is impossible to control the ICE OBJECTS which are located outdoors, as they will quite literally remain or perish as the wind blows. Similarly, climatic changes will affect the exhibition as a fundamental precondition determining the nature of the melting scenes. As a result, the weather is a factor which stands in direct opposition to all other aspects of the exhibition, all carefully thought out, planned, and staged. The interplay with the weather conditions will be documented via the outdoor ICE LETTERS. Their fate will be recorded as they disappear, become blanketed by snow, etc. As part of the exhibition, the state of the ICE OBJECTS will be photographed at predetermined intervals. The photographs will be exhibited indoors. Thus, the melting point is frozen in an image.

Body and Thought
In Kirsten Justesen’s melting objects, the spaces have been arranged with an unusually fine sense for aesthetics and simplicity. The works appear as monumental sculptures in meditative spaces where the spectators take part in the process. The body heat given off by spectators affects the melting process and lets them enter into a state of interplay with the melting through their corporeal presence.
In several places, the complex thoughts behind concept art are linked to the human body in disturbing encounters. The soft, warm body placed on pedestals of ice or the naked body moving huge blocks of ice challenge the concept of sculpture and also transpose spectators into a poetic and philosophical dream image. Through their elementary presence, spectators become linked to the fate of the sculpture – suspended somewhere between natural laws and natural coincidences.